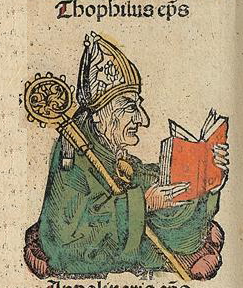 Theophilus, Patriarch of Antioch () succeeded Eros c. 169, and was succeeded by Maximus I c. 183, according to Henry Fynes Clinton, but these dates are only approximations. His death probably occurred between 183 and 185.

We gather from his writings (the only remaining being his apology to Autolycus) that he was born a pagan, not far from the Tigris and Euphrates, and was led to embrace Christianity by studying the Holy Scriptures, especially the prophetical books. He makes no reference to his office in his existing writings, nor is any other fact in his life recorded. Eusebius, however, speaks of the zeal which he and the other chief shepherds displayed in driving away the heretics who were attacking Christ's flock, with special mention of his work against Marcion. He made contributions to the departments of Christian literature, polemics, exegetics, and apologetics. William Sanday describes him as "one of the precursors of that group of writers who, from Irenaeus to Cyprian, not only break the obscurity which rests on the earliest history of the Church, but alike in the East and in the West carry it to the front in literary eminence, and distance all their heathen contemporaries". Provided by Wikipedia
1