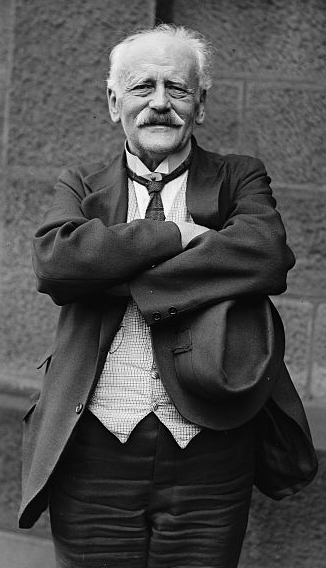 Otto Stapf FRS (23 April 1857, in Perneck near Bad Ischl – 3 August 1933, in Innsbruck) was an Austrian born botanist and taxonomist, the son of Joseph Stapf, who worked in the Hallstatt salt-mines. He grew up in Hallstatt and later published about the archaeological plant remains from the Late Bronze- and Iron Age mines that had been uncovered by his father.

Stapf studied Botany in Vienna under Julius Wiesner, where he received his PhD with a dissertation on cristals and cristalloids in plants. 1882 he became assistant professor (''Assistent'') of Anton Kerner. In 1887 he was made ''Privatdozent'' (lecturer without a chair) in Vienna. He published the results of an expedition Jakob Eduard Polak, the personal physician of Nasr al-Din, the Shah of Persia, had conducted in 1882, and plants collected by Felix von Luschan in Lycia and Mesopotamia 1881-1883. In 1885, Polak sponsored Stapf to conduct a botanical expedition of his own to South- and Western Persia, which was to last nine month. This led to the discovery of numerous new species, which Stapf started to publish. Including ''Iris meda''.

After his return, Stapf was harassed by his boss, Anton Kerner, who voiced his disapproval of his travels. It was rumoured that Kerner wanted Stapf's job for Richard Wettstein, the new husband of his daughter Adele. He publicly accused him of wrong identifications of plants collected during the expedition.

In May 1908 he was elected a Fellow of the Royal Society. His candidacy citation read:

He was also a member of the Austrian Academy of Sciences and the German botanical society. Provided by Wikipedia
1